Posted on September 5, 2012 by reflectionsonawastedlife

So that’s it, a year’s up. I had to see my GP, he had received a form from the Employment Service regarding my Employment Support Allowance. Apparently I’ve had my 12 months and I should be cured by now, and they want to know why not. You have to laugh at the absurdity, and I did. The GP was not quite so light hearted though. It’s rare that you hear someone in a professional position express a political point of view, but he left me in no doubt over what he thought of the governments purge on the sick. He mumbled and moaned, all throughout. He was kind and considerate to me but left me in no doubt as to his opinion of the process. At the centre of the current criticism of the governments desire to see everyone on ESA to be re-assessed by 2014, is ATOS, the company charged with carrying out the workplace capability assessment. I’ve heard it joked that you need to be dead to be assessed as unfit for work, sadly this recent incident appears to prove the case.http://www.bbc.co.uk/news/uk-northern-ireland-19433535#?utm_term=BBC&utm_content=Newsline&utm_source=twitterfeed&utm_medium=twitter . To add insult to injury ATOS are one of the main sponsors of the Paralympics. Those who have been through the appraisal process (the GP report is the first stage before they call you in for a work suitability assessment), talk of being patronised, belittled and insulted. The government say it is to encourage more people back to work, but the sole aim is of course to cut the welfare bill. It’s hard to disagree with the aims of either of these statements, no-one feels comfortable supporting benefit cheats, but once again it is the disabled and vulnerable who are being targeted. Easy targets? It doesn’t bother me personally, they can assess me as much as they want, no employer in their right mind is going to employ someone who is going to be away a minimum of one day a fortnight, add the other hospital appointments, gp, scans etc. , that’s of course dependent on whether I’m feeling well, strong, fit. They’re much more likely to take on a six month pregnant woman with a dependent mother and a poorly cat. Anyway, there’s been enough in the news about ATOS, I’m sure people have their own opinions. What with health assessments, cuts in benefits, outlawing squatting ….anybody would think they’re ignoring the outrage of bankers bonus’s and salaries deliberately .

HMV called again, Ashton being the only store that remains open outside of Manchester City centre. 3 CD’s and a DVD. Macabees -Given to the Wild, The Black Keys- El Camino, Noel Gallaghers, High Flying Birds and the DVD was 8  Mile, Eminem. If you’d have asked me on entering the store what I was going to buy, none of these artists would have been thought of. Although I still left the store feeling I hadn’t bought what I went in for (I still can’t remember) I’m very pleased with my purchase. I haven’t watched the DVD  yet, although I‘ve seen it before. I’m not a great film watcher and never really watch DVD’s unless it’s music related, but I’ve given in to the insomnia. Well I’m not sure it can be classed as insomnia really, it’s more a disturbed sleep pattern. It’s common to be so tired I can’t keep my eye’s open, only to be awake again an hour later. This will happen many times during the day and night. So rather than get angry I’ve just decided to go with it. Hence the DVD’s, I’ll often put one on at 2 o’clock in the morning having just woken up. There’s only so many times you can watch a repeated programme on BBC Three or Four during the night. I’ve watched documentaries on caravans, motorways, street cleaners, nurses midwives, air travel, space and volcanoes, and  I could probably write a dissertation on any of them.

The other morning I came downstairs to a candle burning dangerously close to a hangng curtain. To say I was shocked was an understatement. I burn candles, tea-lights, oil burners, incense, joss sticks all the time, I think Mrs. C is getting fed up with it, she rarely empties the ash from the joss stick holders anymore.  What happened the other night I don’t know, I thought I’d extinguished them all, but I must have just turned the light off and walked upstairs without looking back. It could so easily have been a costly mistake, imagine going through all of treatment and chemo to finish yourself off in a house fire !  I think candle paranoia has just set in.

I’ve just got back from a few days down south seeing the kids. What a great time it was too, not kids anymore and it’s just great to be spending time with two wonderful adults. I know I can speak for all three of us in saying it was great to be spending time with each other.  Even Lewis and Alana don’t really spend much time together so it’s nice for all three of us.  Alana is off to Uni on 17th, and she seems really excited and enthusiastic about it. She’s clearly mapped out what she wants to do in the future. Lew was his normal self. 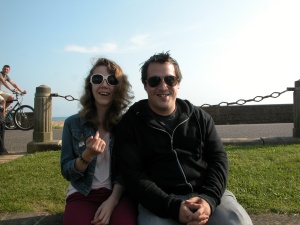 My visit was planned to coincide with his band playing at a festival, but had to be cancelled along with another gig due to the singer having slipped a disc. I was disappointed not to have seen them, but more so for the band because they missed out on a payday. We spent Monday in Horsham, a revelation to me, so many changes since I was last there. A thriving shopping centre with more than enough interesting things to look at or buy. No sign of any recession here, I didn’t see a single empty shop, and just by observing the shoppers you could see this was the centre of tory heartland. It was a pleasure to spend the day there, but it does make you wonder just what the difference is that allows this town to thrive so well when it’s northern counterparts are struggling so badly. Inevitably we hit the charity shops , and managed to  spend nearly £30 on CD’s alone. Lew chose more on requirements for his DJ sets, whilst picking out CD’s for me saying “you’ll like that”, good enough evidence for me.

Alas it was over far too soon, and I was back up north for Tuesdays hospital appointments. MRI and CT scans. I thought I would have been a little more anxious as the date neared, but in fact it was just the opposite, they were just like all the other scans I had. The liver scan did seem to take longer than normal, but other than that there was nothing out of the ordinary. I don’t know when I get the all important results, I’ll speak to Dr. S on Thursday before my final chemo of this course. I’m not thinking about the outcome, there are still too many options, but I’m ready to accept whatever the scans results show. I’ll deal with whatever it throws at me.